I love it when foods are just on the cusp of being vegan, and only need a wee adjustment to push them over the edge into the land of veg-happy delights.  This great Eggplant Parmesan dish from Clean Green Simple is one of those foods! 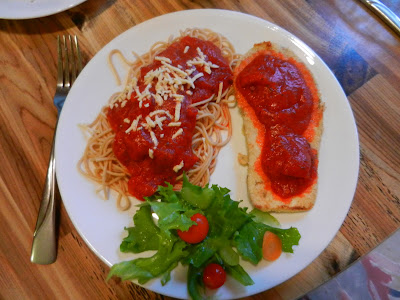 Now usually I live by the rule that one does not screw with the recipe when one is making it for the first time.  But I also usually have a jar of nutritional yeast in my cupboard, yet for some reason (most likely due to broth and gravy making), the jar was nearly empty when I went to make this recipe.  So I wound up with no cheese sauce and had to sub-in some Daiya.  Oh well.  I was also forced to skip the broiler step due to a lack of broiler-safe plates…

Anyway, enough of what I didn’t do.   I had a beautiful eggplant crying out for some love, and this recipe totally delivered.  The batter was just right, it wasn’t too heavy, and the eggplant was perfectly tender on the inside, with a nice crispness on the outside.  The only problem I had was residual breadcrumbs on the pan that of course burned up and made the smoke detector go off (but that’s how you know dinner is ready, right?!).  The pasta was a regular store bought whole wheat, cooked a little past al dente (I like my pasta MUUUUSHY).
As for the sauce, I also used Clean Green Simple’s Super Easy Marinara Sauce, which is truly worthy of its name!  Not having to dice up any veggies to make the sauce was great, and what was even more kick-ass was that it was completely delicious.  I let it simmer for probably about ½ hour total.

In the end, this was a fantastic, filling recipe, and I was really happy to feed such a good dinner to my mom and brother, who don’t eat at my house very often.  Because I am their estimation of what vegans cook and eat, it is important that the meals always be delicious when they are dining with us.