Shopping vegan at the Asian grocery


If you are a vegan like me, you are probably a “perimeter shopper” when you are at the grocery store.  That means that you stick to the outside edges of the store, you walk through the produce, bakery and other cooled food departments, and almost never venture into the middle parts.  There are a couple reasons for this.  Firstly, most vegans like fresh stuff, which generally speaking does not come out of the boxes and bags of “the middle”.  Secondly, if one actually does venture into “the middle”, you then have to read all the ingredients on the god-forsaken labels to find out if the product is in fact vegan before you drop it in your basket or cart.  Sucky.  (Actually, new labeling requirements in Canada are such that the major common allergens are soon required to be listed in great big bold font at the end of the ingredients list, including major vegan no-no’s like milk and eggs… no luck though on hidden assholery like carmine, lanoline, etc).


So, I present to you, a very humble vegan’s guide to shopping at the Asian grocery, based on my most recent trip to 99 Supermarket in Edmonton’s Chinatown.

Produce!
Don’t let the weird root vegetables scare you!  The Asian grocery is a great place to pick up produce, often at a much lower price than the mainstream grocery store.  On the day I was there, bags of bean sprouts were on sale for 50 cents!  Many of your North American dietary favorites can be found in the produce department, along with a bevvy of exotic choices for the more outgoing.  My favorite unusual vegetable to pick up here is the nagaimo, a white root that is grated for use in making vegan okonomiyaki.

The next best thing to fresh produce is produce in a can.  Well, frozen might be the next best, but produce in a can is just so damn handy.  Already having been de-seeded/peeled/cored/whatever, canned produce is a great, affordable convenience food that is available in great variety and abundance at most Asian groceries.  On this particular visit, I picked up a couple of cans of jackfruit.  Jackfruit is what is known as a “tofu-vegetable”; it takes on the flavor of whatever you season it with.  As such, it makes a completely delicious and ingenious vegan pulled pork! (if you haven’t tried this, you really should, it is absolutely mindblowing.)  You could buy a whole jackfruit  (which they have in the produce department) and process it yourself, but I’ve found the cans are so easy and they make the perfect amount to serve 2-3 if you’re making the pulled pork recipe.

Obviously tofu.  This Asian and vegan dietary staple is available in so many varieties that I didn’t even know existed until I went to the Asian grocery store.  They often even have tofu made fresh!  The brands that Asian stores carry tend to be much cheaper than the ones carried by the bigbox competitors, and of better quality quite often as well.  On this particular trip, I was hoping to find some inari.  I couldn’t find anything specifically labeled as such (99 Supermarket is a Chinese grocery, and most foods are not labeled with their Japanese names), so these were the two things I picked up: frozen sheet of dried tofu and braised tofu in a can.  I’m hoping that when I open them up, they are inari pockets, but if they aren’t then I can always chop them up and put them in a stir fry anyway.  One has to be willing to be a bit brave and experimental in these cases! 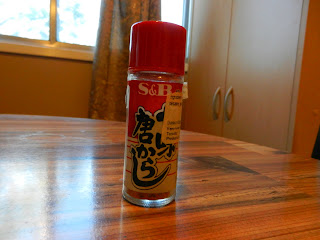 I love this stuff.  Shichimi is Japanese seven pepper spice.  It is soooooo good when you add it to a bowl of udon noodle soup!  I use it to season a ton of Asian dishes, it has some sort of magical powers in the peppers and black sesame that makes absolutely everything taste spicy-good! 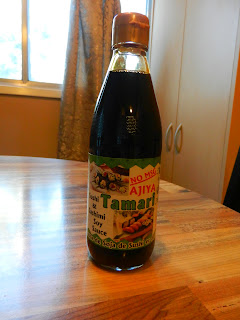 Superstore keeps the tamari in the gluten-free aisle, and charges a small fortune for it as a result.  Stop paying high prices and pick it up next time you’re at the Asian grocery store.  I saved about $2 on this bottle alone.  I use a lot of tamari in place of salt in recipes, and it is a key ingredient in my favorite miso gravy too!

Ever wanted to take a slug of red bean juice?  Lychee juice?  The varieties are seemingly endless.  There are so many different types of juice to try at the Asian grocery.  Often you can buy single cans or tetra packs if you want to try it out before committing to a larger amount.  And if you like coconut water, it is massively cheaper at the Asian grocery too!  On this visit I went pretty tame and tried out a mango juice, it was totally delicious.

No picture because I didn’t buy any this time, but the store had a huge selection of really interesting vegan meats, including a “ham” and “ribs”.  The only thing that sort of worried me was the “chicken ham” (????).   You can also find canned seitan as well.

So that is just a sample of some of the vegan foods you can find at the Asian grocery store without too much label reading prowess.  Consider taking a trip to your local Asian grocery the next time you go shopping.  Give yourself a bit of time to wander the aisles, you might be surprised to find so many interested vegan things to eat.
Posted by leahdawn at 18:24