"Why is it that the less one has to say the more one says it in the most pompous and pedantic way possible?" Corelli asked. "Is it to fool the world or just to fool themselves?" 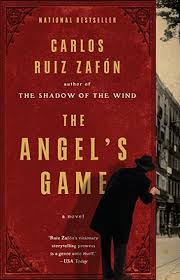 It's time for another Book Club review!  This month the genre we selected was mystery.  I took this opportunity to read a book that has been on my "for later" list for quite a while: The Angel's Game by Carlos Ruiz Zafon.  This book is a prequel to Zafon's runaway hit, The Shadow of the Wind.

Now I'm typically pretty suspicious of prequels.  They have always rubbed me the wrong way and I'm not totally sure why.  In my experience they just seem to be sub-par compared to the original work, like a failed attempt to relive the glory of the first book.  And in the case of Zafon, his first work of adult fiction was very glorious indeed.  I absolutely LOVED The Shadow of the Wind, despite the gore and violence that sometimes puts me off.  It was an excellent work.  Angel's Game has a mighty large shadow to stand in, and it just doesn't quite fill the shoes of Zafon's previous work.

The difficulty with reviewing a book that is part of a series is that it is nearly impossible to consider the book on it's own individual merits and consider it as a separate entity.  The whole is greater than the sum of its parts, and a book designated to be part of a series is always cast in the shadow of it's predecessors.  With this in mind, I am trying not to be dismissive of The Angel's Game but it's just not as good as Shadow.  This is purely a fact.  So I'm getting the comparisons out of the way now.  Firstly, while both are epic page turners, Shadow is more enticing and demanding that the reader find out what happens RIGHT NOW.  It took me about three weeks to read Angel's Game and I seem to recall I flew through Shadow in only a few days.  A second point of comparison is the level of realism between the two.  While each flirts with the occult and various heavenly hosts, Shadow lands with it's feet firmly in reality, whereas Angel's Game simply leaves the reader baffled in regards to the involvement of the supernatural as they turn the last page.

This second point is where I'd like to undertake a discussion of this book apart from its predecessor.  Now I am usually a fan of weird endings.  I like them.  Endings don't have to make sense and they certainly do not have to be happy.  But the ending of Angel's Game is completely bizarre.  The reader is left to sort out a great many things for themselves.  Is the struggling writer David actually insane, or is he being compelled by other forces?  The boundaries between reality and what David imagines are indecipherable.  And perhaps this is what the author intended, but it makes for a frustrated feeling after so much of the story is explained to leave this critical question unanswered.  With so much time spent inside David's head (the novel is from his perspective), the other characters flounder a bit in terms of development.  I was very much hoping there would be a bit more about the Sempere clan (who are key players in Shadow), as well as more insight into the relationships between the various characters.  So much of this is left unsaid that the reader is forced to extrapolate and make their own opinions.  And again, I'm not sure if that was what the author intended or if the book is floundering at these points.

Despite this, Angel's Game is still a real page turner.  It is a highly suspenseful read that demands the reader's attention and is quite exciting overall. Zafon creates a highly believable setting, his pre-World War I Barcelona is described in fascinating and consistent detail, from buildings to clothes.   The next part in this series is The Prisoner of Heaven, which is a sequel to Shadow of the Wind.  Because of Zafon's fascinating writing style, I have no doubt I'll be reading it as well.
Posted by leahdawn at 13:24